What Is Kinda Funny?

Thank you so much for wanting to support us at the Platinum tier on patreon.com/kindafunny or patreon.com/kindafunnygames. Each month, we’ll announce a new physical reward, spend the month gathering fellow Platinum subs, and then ship the reward the following month.   This page will keep you posted on what each reward is and what the […]

On every 2020 episode of PS I Love You XOXO, Greg Miller and Blessing Adeoye Jr. are each picking a new game from the PSN, playing it for a week, and then ranking it on the next episode. They call it: 104 PSN Games Ranked. Here, you can find the most up-to-date rankings. If you’re […] 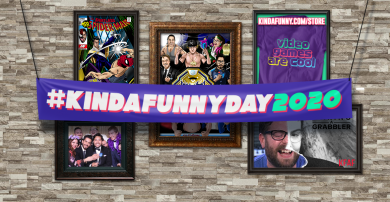 For five years, you’ve helped make the dream that is Kinda Funny a reality. You’ve taken a us from a spare bedroom to a state of the art studio to E3 to meet and greets and so many other amazing places. All we do is talk about the things we love, and you find a […]

Hello. We’re the keepers of many things. One of them is who the fastest Batman: Arkham Asylum and Kevin’s Pipe Game speedrunners are. Here’s is the official list:   BATMAN: ARKHAM ASYLUM Barrett Courtney: 5 hours / sometime in 2017 Everyone else who doesn’t matter KEVIN’S PIPE GAME Kevin: Fast / 2019

Here’s our full E3 schedule! We’ll see you on Twitch, YouTube, and podcast services around (tap tap) the globe!     Thank you Cameron Kennedy for the graphic!

Kinda Funny Patch Notes 4.0.1 (is this how patch notes work?)

Today we had a stream about some updates for you regarding a WHOLE bunch of stuff that we announced back in January! If you want to watch the whole stream, you can do so here: https://www.twitch.tv/videos/422202827 Platinum Patreon Update: We’re VERY VERY excited to announce that we’ll be partnering with Printful for our Platinum rewards moving […] 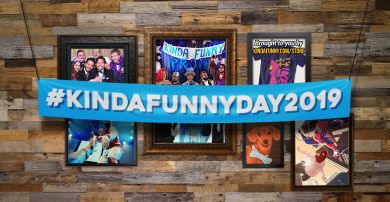 We’ve had a hell of a four years! We quit our jobs, made a bunch of shows in spare bedroom, won an award, used your support to move into a state of the art studio (even though it’s still in an apartment), hired ACTUAL employees with health benefits, won ANOTHER award, and brought on a […]

Join us for the inaugural Kinda Funny Games Showcase, a celebration of all things gaming!     Date: Saturday, December 8th Time: 10am PT twitch.tv/kindafunnygames       Are you co-streaming with live reactions or doing a post-show? Let us know on Twitter by using #KFGShowcase!